BlockAudio was founded by two HiFi and music enthusiasts because amplifiers available on the market failed to meet their expectations in terms of sound, finishing or the price performance ratio. Their first pre/power amplifier combination has a price of 70,000 Euro. No, this doesn’t mean you can smirk, it is not a contradiction: Their amplifiers convince in all three criteria.

Jiri Nemec and Dan Oudes have been working together since 2003; they were enthused by the speaker building kits from Dynaudio and built speakers together. In the Czech town Olomouc, Dan Oudes operates the HiFi store AudioStudio and imports products from notable manufacturers like Bryston, Dynaudio, Plinus, Thales etc. Jiri Nemec is a qualified communications-, measurement- and control engineer, who worked in Austria at the Philips plants in Vienna and Althofen. His special professional interest lies in the development of automated measurement series with Audio Precision equipment. In 2013 the company BlockAudio s.r.o. was founded and already within the same year they exhibited at the klangBilder show in Vienna. This is where I saw the impressive amplifiers for the first time and introduced them elaborately in the show report. 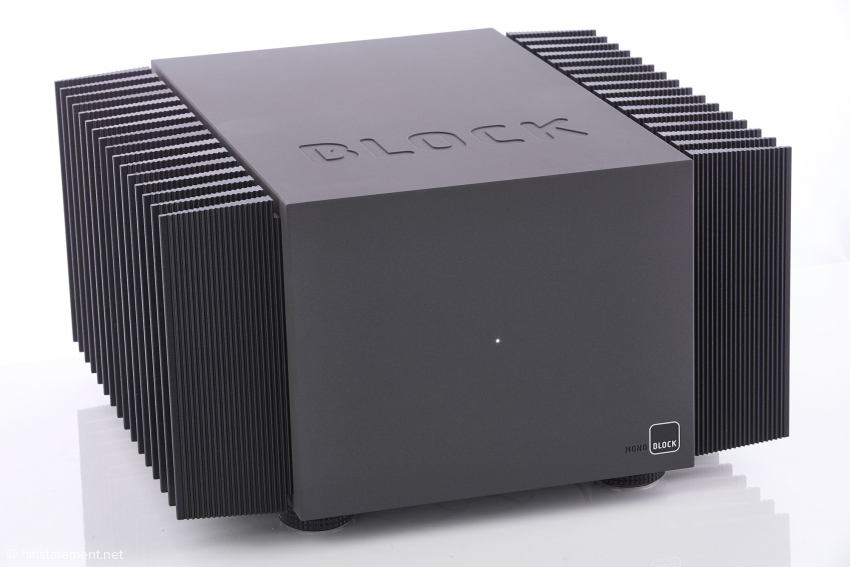 No matter whether the aluminium, natural anodized amplifiers back then, or those with the black Nextel look: whoever sees these exceptional, professionally manufactured components would never assume that they originate from a small manufacturer. One fascinating aspect in the HiFi scene is that individuals or, like in this case a small company, with a lot of personal investment and suitable suppliers, can bring products to the market that compete with the high-class products of companies like Harman, even in terms of processing and manufacturing efforts. Admittedly, for Levinson amps the design would have probably been less modest and with a higher glamour factor, but I personally like the deliberately discrete design of BlockAudio very much. Here, form follows function. 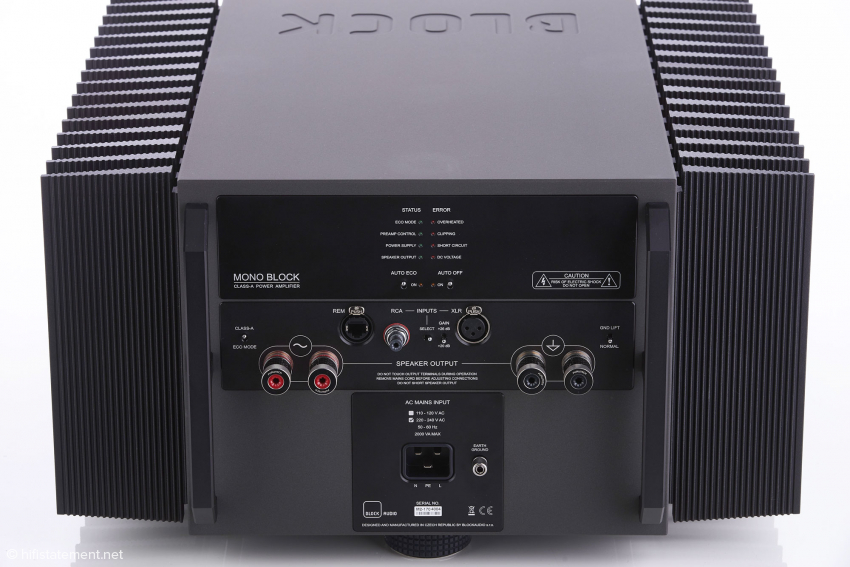 The Monoblock features two pairs of speaker terminals. The energy is taken from a IEC 60320 C19 connector. Therefore, I had to refer to the supplied power cables

In automotive and watch manufacture, withdrawing from series production and moving in the direction of individual manufacture in most cases means multiplication of the price when compared to similar products – at least in terms of function. This is not the case for BlockAudio as the first glance at the amps already shows: For the above-mentioned price, you get a strictly channel separated preamplifier with a battery power supply in a separate case. The two mono power amplifiers are dimensioned for 200 Watt in Class-A and weigh 90 Kilograms each. However, it is not only about the mere use of materials: Jiri Nemec and Dan Oudes also emphasize that no visible screws disrupt the simple elegance of their creations. The pars pro toto for the diligence that went into every detail of their amplifiers, are the cabinet’s feet: Two of the three feet under each device are height adjustable, so that the components are perfectly placed in a horizontal position. According to Jiri Nemec this is especially important for the Power Block, as here the two transformers for the supply of the audio circuit boards are mounted hanging. During transport, they are secured by tightly screwing in of the feet. Instead of a spike, the feet have a steel ball which deduces vibrations to an area of 10 by 10 millimetres of Widia tool steel. A piece of merino wool felt under each foot protects the underlying surfaces. The structured surface of the feet rounds up the positive overall appearance.